Six voluntary and community organisations (including two Consortium members, Search and Newcastle Council for Voluntary Service, with apologies from Success4All and two who’d let me know their views beforehand) gathered yesterday at NCVS to take part in a focus group on the purpose and direction of travel for the Newcastle Fund. NCVS organised the focus group as part of its work to enable the sector to take part in the Council’s consultation on the Fund, led by the Council’s Daryll Alder and Karen Inglis.

The Fund (which for the 2017/18 round received 100 bids for £750,000) is the City Council’s grant aided programme for VCS organisations. The maximum amount that can be bid for was £50,000 and the average award was 75% of that requested. Out of those 100 bids, 34 were successful. Most of the funding had gone to the most deprived wards in the City. The full list of applicants (successful and unsuccessful) is here.

In addition to the £750,000, there was around £300,000 of existing commitments being funded including £80,000 for cultural events (including the Mela, and Chinese New Year celebrations). 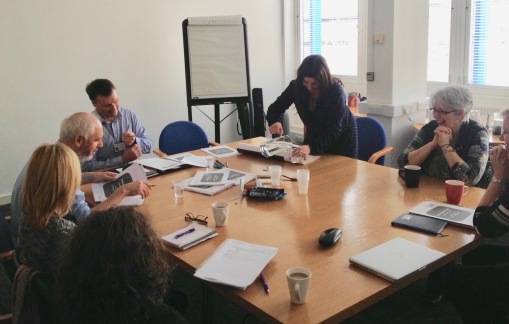 As the total amount has been reduced year on year, the Council are consulting on its purpose and future as well as the process for applying. Our focus group concentrated on the former, although all those present who’d applied for the Fund noted that they’d started completing the online form with great enthusiasm, only to lose the will to live by the end; as later questions ask for much the same information as early ones. The Council will change the application form.

The consultation ends on 6th April, giving time for Daryll and Karen to draft a paper for the Council’s Cabinet meeting on 24the April 2017. The Council’s proposal has already been to the Voluntary Sector Liaison Group and some information was considered by the Council’s Health Scrutiny Committee.

The Council intends to publish an annual prospectus for the fund and review how funded work is to be monitored and evaluated.

They want to maintain the Fund to have a citywide approach, although are proposing to involve Ward committees more in influencing its spend. Our focus group was not so keen on this idea as it would mean that Ward committees that did not understand the work of citywide organisations were less likely to favour their applications. In addition, this risked work with groups of people that were seen as unpopular causes would be less likely to be funded.

The focus group was aware that there was cynicism amongst some Fund applicants; perceiving that elected members have some control over who/what gets funded so if your organisation wasn’t favoured, again, your bid would be less likely to be successful.

Other funding – There was much discussion on the positives of the Fund taking into account other Council funding streams; Community Led Local Development and commissioned funds, as well as external funds too. The Council is more able to fund (via commissioning) certain types of work. In which case should the Newcastle Fund be best focussed on those organisations that are supporting their communities on other types of work? There was a suggestion too about creating a central, multisector group that could coordinate a Newcastle response to funding opportunities and have a strategic overview of how funding in the city is managed and targeted.

Size of bid/size of organisation – The squeezed middle (medium sized VCS organisations that are struggling under austerity) are ones which have less attraction for many larger funders. Perhaps the Fund could prioritise funding these organisations, which are the backbone of the VCS n the City?

New vs existing – There was a feeling that it would be better to use the Fund to invest in existing providers than to develop new ones or fund organisations to move into the space already occupied by existing providers.

Core vs project funding – Similarly the focus group would want the Fund to support core costs to sustain existing organisations with a good track record and reach in communities. The group accepted that the Newcastle Fund has funded core costs but this would be a shift in recognising the importance of stable management and administration to VCS groups and funding the core cost as an end in itself. This type of funding is harder to attract from many funders who want to see delivery but don’t want to fund the infrastructure that enables delivery to happen. The key issues is for bidders to demonstrate how the funding of their core costs will enhance the community/their services for beneficiaries.

Impact measures – we discussed how to measure impact; that this needs to be proportionate to the size of the funding allocation and that bids need to include resources to collect data and report back.

The consultation ends on 6th April. To have your say click here.